Thank You to Del. May for His Service 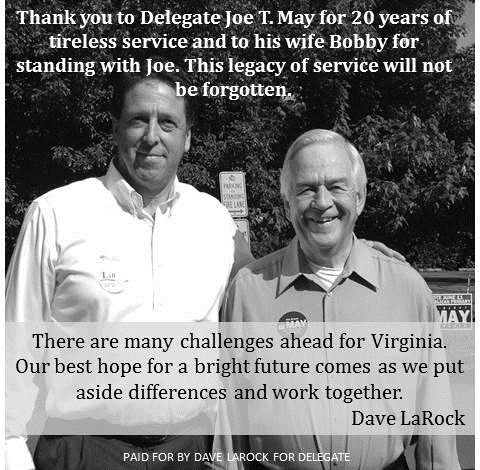 LaRock Thanks Del. May for His Service; Focuses on November Election and Legislative Agenda

-- Dave LaRock says “I am grateful for Del. May’s two decades of service to the Commonwealth. As we move forward to the General Election, I will continue to present the case for cutting taxes, controlling spending, and protection of our fundamental rights to life, liberty, and property.”

"Joe May has provided many years of service to this district and the Commonwealth of Virginia. For that, we thank Joe May and his family. He is a fine gentleman and I wish him all the best personally and in his business.

I will work hard to serve the constituents of the 33rd district in the years ahead."

The solidly-Republican 33rd district stretches from Leesburg to Winchester and includes portions of Loudoun, Clarke and Frederick Counties. The district voted for Mitt Romney by fourteen points