Hamilton, VA – Senator Richard Black and Delegate Dave LaRock, both of Loudoun County, today announced filing of legislation which would provide desperately-needed toll relief in Northern Virginia. If successful, HB 1489 and SB 898 will reduce tolls on Interstate 66 Inside the Beltway (ITB) and the Dulles Toll Road (DTR) by:

Delegate LaRock said, “Northern Virginia was already one of the highest-tolled regions in America – now, commuters driving the 36 miles from Leesburg to Washington, DC during peak times travel on three distinct toll roads, paying as much as $53 one-way. My constituents call this ‘Highway Robbery,’ and I agree. Tolls this high hurt families, hinder economic growth, and are just unacceptable.”

Senator Black also pointed to recent problems with the tolling system, stating "It’s ironic that the I-66 tolling equipment failed so spectacularly and so quickly. People entering the toll road did so without knowing that the trip would cost $39. These tolls are among the highest in the nation. The new tolling system is not off to a good start."

Delegate Tim Hugo, vice chairman of the House Transportation committee, added his support for the bill saying, “It is essential that we do everything we can to provide relief for commuters; these tolls are way too high.”

Former Delegate Rich Anderson also supports this effort, stating that “I represented a Prince William district in the House that arcs between I-95 in the east and I-66 in the west. This is my home and this tolling hurts the community I love dearly. I’m keenly aware that the stratospheric and unprecedented tolls on I-66 completely disregards the will of the people, many of whom are rightfully outraged. I urge my colleagues in the Virginia General Assembly to send to the new governor a slate of proposals that reduces these extravagant tolls to levels that can be afforded by the working families of Virginia.”

Loudoun County Supervisor Ron Meyer said, "We need to make transit a better option, but instead, these tolls simply price people out of their cars and out of employment opportunities. This bill should have strong bipartisan support."

These Virginia legislators are among nine who signed a letter to Gov.McAuliffe in December, requesting relief on Northern Virginia tolls. More information is available at http://www.votelarock.us/issues/toll_relief 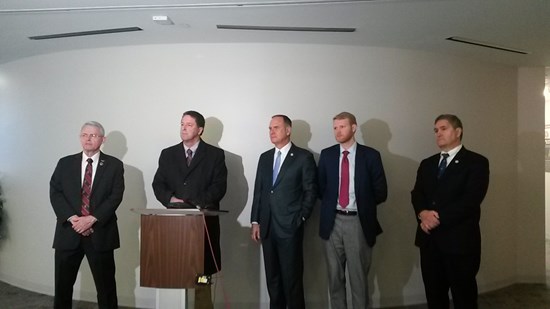