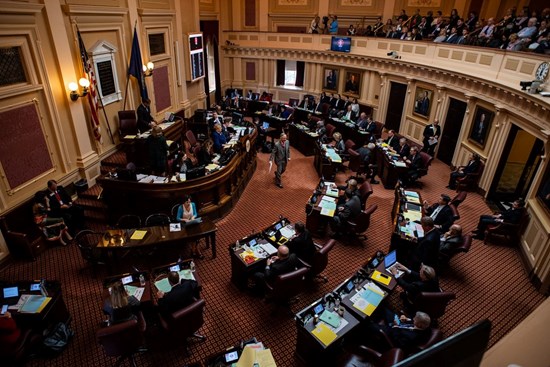 The opening of the 2019 session of the Virginia General Assembly in January in Richmond. (Salwan Georges/The Washington Post)

Dave LaRock, a Republican, represents parts of Loudoun, Clarke and Frederick counties in the Virginia House of Delegates.

On Wednesday, the Virginia General Assembly returns to Richmond for the Reconvened Session.

One of the measures Gov. Ralph Northam (D) has sent down for our consideration comes at the request of Sen. William M. Stanley Jr. (R-Franklin): a budget amendment that would end the punitive practice in Virginia of suspending a driver’s license for unpaid court fines and fees. This initiative seeks to strike a meaningful balance between ensuring accountability within our laws and providing a common-sense path for hundreds of thousands of Virginians toward redemption.

Though we all strive not to, everyone makes mistakes. Learning that very important life lesson at a young age from our families, communities, mentors and clergy prepares us to empathize with others who may stumble. That is a lesson we as legislators, working in service to our constituents, must consider when shaping policies for the commonwealth — especially when we aim to preserve law and order while supporting resilient families, strong communities and a vibrant economy.

The amendment rescinding the current license revocation law, if passed by the General Assembly, would accomplish the goals of legislation Stanley and I have introduced at different times in the past few legislative sessions: to repeal Virginia’s court debt license suspension law. This effort seeks to halt the practice of adding license revocation to what, for some, is already more than they can reasonably bear. Of course, some, hopefully just a few, may continue to defiantly avoid payment of a lawfully imposed fine or fee. No law is perfect.

It is very important to underscore that this proposed budget amendment would not affect driver’s license suspensions that are a consequence for dangerous driving infractions. Likewise, facilitating redemption would not mean we would erase the ledgers of those who owe court debt: the budget amendment would not eliminate debts owed. In fact, a compelling point in support of restoring driver’s licenses to those who owe our courts is to enable them to find or maintain work, pursue educational opportunities and even advance in their careers toward ever more stable financial ground, which puts more folks in the position of being able to fulfill all of their obligations.

Close to 1 million Virginians now find themselves without a driver’s license because of suspension for unpaid court debt or other reasons; that’s nearly 1/8 of our state population, and it’s one in six drivers. Many of these now find themselves struggling to join or stay in our workforce, and this at a time when Virginia finds itself seeking to fill the very jobs that require a driver’s license. It seems like every week now, in newspapers and even roadside banners, I read about bus driver and truck driver shortages. As our population ages, we hear of staffing needs in the home health-care industry, and, as our localities develop, our construction industries must have a labor force that is able to respond. A 2016 study from the Bureau of Labor Statistics estimated that 30 percent of all civilian jobs require driving as part of job duties — and that does not even take into account the needs of our military.

Second chances sound good and are good but must be approached thoughtfully. Like any decision legislators make, personal perspective is paramount. Not all Virginians start out on a fair and equal playing field. For those struggling financially, a $300 fine can seem insurmountable; it can mean the difference between buying food or paying an overdue electric bill.

When reflecting on my role as a legislator, I consider an Old Testament passage, Micah 6:8: “He hath shewed thee, O man, what is good; and what doth the Lord require of thee, but to do justly, and to love mercy, and to walk humbly with thy God?” Our laws should strike a balance between justice and mercy and avoid making the penalty for a minor mistake into something much worse. We should prescribe reasonable consequences for mistakes without creating barriers that prevent people from caring for themselves and their families.

When we return to Richmond Wednesday, I will be supporting Stanley’s efforts to move Virginia forward through the governor’s budget amendment, and I urge my fellow legislators to do the same. We can, in our laws, be just and merciful, for the benefit of all. 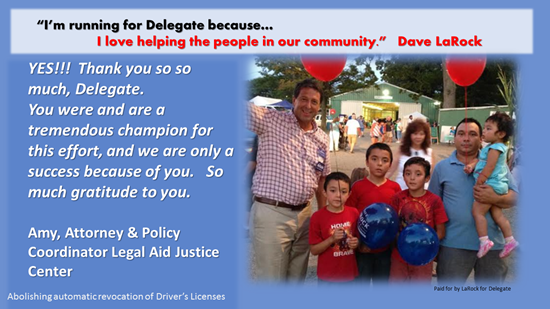