Our nation is at a turning point. Trust in Congress at an all-time low, and a majority of Americans know the Country is on the wrong track. This Election Day will be critical in getting our nation back on a path to prosperity. The past six years have been filled with broken promises and failed leadership from Barack Obama, Nancy Pelosi and Harry Reid.

We are in worse standing with every country in the world than we were six years ago, people are continuing to drop out of the workforce, our economy is stagnant, and our healthcare system is more broken than ever. That’s why we need to elect true leaders who will not only keep the best interests of the Valley in mind, but will work to improve our Commonwealth and the Nation. That’s why this November 4th, I will be voting for Ed Gillespie for Senator and Barbara Comstock for Virginia’s 10th Congressional District.

Ed Gillespie will be a distinct alternative to Mark Warner, who despite his best attempts to run the other way from the president, has voted with Obama 97% of the time. Most notably, he cast a deciding vote to pass ObamaCare, which has kicked 250,000 Virginians off of their healthcare. Another term of Warner would mean that he would continue to support Obama and these failed policies. Ed Gillespie recently laid out his vision to repeal and replace ObamaCare.

His vision of economic growth is just what we need. He has promoted our energy economy and knows that we can unleash the potential for Virginia to become a leader in our nation on that front. We need Ed Gillespie in the Senate.

I have worked with Delegate Comstock in the House of Delegates. I know she has what it takes to hit the ground running on day one. She will work hard for the Valley, the 10th District and will be a leader in the Virginia delegation. As your paper mentioned in your endorsement, she will offer “genuine continuity” to Congressman Wolf.

She has worked on legislation that has saved taxpayers hundreds of millions of dollars, she led on legislation that combats human trafficking and she has been on the front lines to stop the heroin threat that is plaguing our area. Barbara has been a leader in the House of Delegates serving as the Chairwoman of the Science and Technology Committee. I have enjoyed serving with her in the General Assembly and I trust she will be a great Congresswoman who will work across the aisle to get bipartisan results. We need Barbara Comstock in Congress.

Published in the Winchester Star October 30, 2014 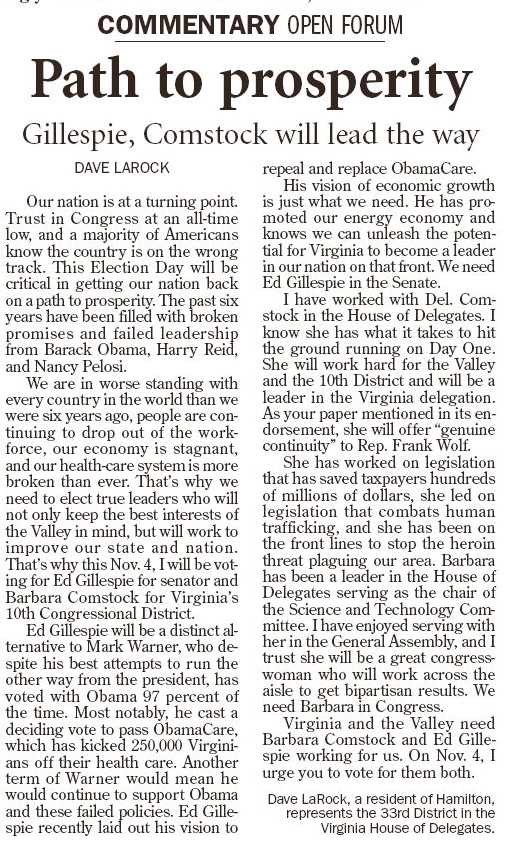