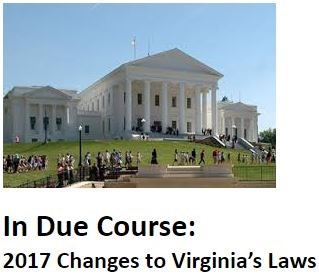 The 2017 General Assembly adjourned at the end of February. Throughout the 46-day session, we considered thousands of bills. Most of the bills that ultimately passed and were signed by the Governor will go into effect on July 1.

Every year, the General Assembly publishes a comprehensive list of bills that are likely to affect your everyday life. You can read the full list here. Below, I have highlighted a few of the major accomplishments, as well as more about some of my legislation that passed, and many bills that passed the General Assembly, but did NOT go into effect because Gov. McAuliffe vetoed them.

State Budget
The General Assembly produced a conservative, responsible and balanced amended state budget ahead of schedule for the third year in a row. The budget reduces debt by about $61 million and saves $10.8 million G.F. for use in the budget. The budget includes no tax increases, eliminates all of the Governor’s proposed fee increases.

Left-lane drivers
The General Assembly passed legislation that fines drivers $100 who fail to drive on the right side of the highway.

Bullying
Under new legislation, public school principals will be required to notify the parents of any student involved in a bullying case within five days, including the status of the investigation.

Colleges
Legislation passed mandates that public colleges and universities must report to the State Council of Higher Education for Virginia the value of investments every year. Legislation also requires that schools must also give notice of any proposals to increase tuition and fees.

Blaze Pink
A new law allows hunters to wear blaze pink instead of blaze orange hunting apparel when required during firearms deer hunting season or the special season for hunting deer with a muzzle-loading rifle.

Opioids
The General Assembly passed a number of new laws to fight the opioid epidemic. These measures include my HB 1453 Naloxone Dispensing for Use in Opioid Overdose Reversal, which went into effect immediately upon the Governor's signature on Feb 23, but that and many other opioid-related bills and others relating to mental health or general health care availability were important achievements, and some do go into effect tonight:

Other of my bills which go into effect July 1 include:

Unfortunately, many of the good laws which I supported were included in the record-setting 49 vetoes by the Governor. That means the following bills, including two I introduced, will NOT become law tonight:

Please contact me office if you have any questions about this or any other legislation!