LaRock stated, “I’m disappointed that Governor McAuliffe would turn his back to children whose educational needs are not being met in the public school setting. Constituents have told me how public schools are failing to meet the federally mandated requirements of their child’s Individualized Education Plan (IEP). Wealthy families already have school choice, but this bill would have expanded that freedom and opportunity to thousands of vulnerable kids.”

Education Savings Accounts are a proven example of problem solving through smart innovation, not endless appropriations. Over 1.1 million children in Arizona, Florida, Mississippi, Tennessee, and Nevada are eligible for Education Savings Accounts. This school year, over 11,000 students are using the accounts. American and Virginia voters overwhelmingly support school choice programs for good reason. This is the third year that LaRock’s ESA legislation was killed by statewide Democrats: Lieutenant Governor Northam defeated HB 2238 in the 2015 session, and McAuliffe vetoed HB 389 in 2016.

“The Governor’s veto exemplifies why so many citizens are fed up with politicians: instead of embracing a common-sense solution that helps people in need, saves taxpayer money, and improves educational outcomes for all students, the Governor does what his special-interest supporters tell him to do. This is the third year in a row that McAuliffe and Northam have yielded to the education establishment, rather than listen to the struggles and concerns of ordinary Virginians desperate for better education options. Virginia deserves better. It’s time to give the people of Virginia what they are asking for, more education freedom through Education Savings Accounts. I look forward to working with a Republican governor to make education opportunity accessible to all,” LaRock added. 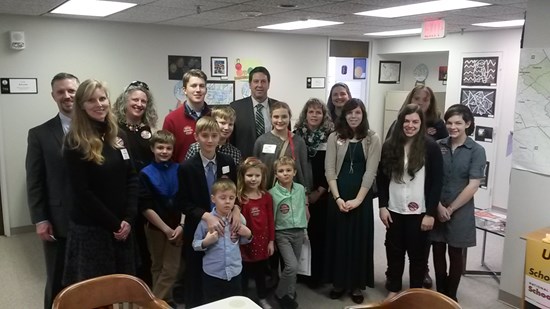 Del. LaRock with supporters of School Choice at his Richmond office during the 2017 session.