UPDATE: 6/30/2016 - "The land will remain open to the public during this interim period." Read the latest about the plan for the park here

Yesterday, after years of work, the deed was recorded transferring approximately 600 acres of land in Northwestern Loudoun County to the Virginia Department of Conservation & Recreation. This transaction, first announced by Governor Bob McDonnell in January 2014, means that Loudoun County now officially has a state park!


The land for the state park was donated to the Commonwealth by the Old Dominion Land Conservancy (ODLC) of Purcellville, which received the land from the Robert and Dee Leggett foundation. The property borders the Appalachian Trail and includes historic farmsteads, deep woods and wildflower meadows.

Senator Richard Black stated, "I'm proud of all of the work our local elected officials have put into bringing this project to fruition.  It will be a lasting benefit to the community that will provide a place for people to enjoy the beauty of Loudoun County."

Delegate Dave LaRock added, "I'm excited about this new park being established and thankful for the efforts of Sen. Dick Black, Del. Randy Minchew, Supervisor Geary Higgins and State, County and ODLC staff to make this state park a reality. This park will be a great addition to Western Loudoun's already-vibrant winery and tourism industries."

Delegate Randy Minchew said, "I have hiked through this land a number of times and it is a great piece of property. It could become the Sky Meadows State Park of Loudoun County."

Catoctin District Supervisor Geary M. Higgins added, “The significance of this new state park is immense and I have been privileged to have been a part of this process over the past three years.  This park will be a jewel to Loudoun County, the Catoctin District, the Commonwealth of Virginia and the Nation.  From a historical perspective alone, this park preserves a considerable piece of history as this land includes the route Mosby’s Rangers took to attack the federal camp of Cole’s Cavalry one-hundred and fifty years ago on January 10, 1864.  I commend Bob and Dee Leggett for their donation and foresight to create this park that will be enjoyed not only by residents of Loudoun County but by many future generations.”

The 600-acre parcel was part of the 900-acre Blue Ridge Center for Environmental Stewardship (BRCES), and is the initial portion of what may become a 1,500-acre park. It will be several years before the property is developed. The Virginia Department of Conservation and Recreation, which manages the Virginia park system, will work to develop master plans for the Loudoun County property once acquisition is complete. The master plan will incorporate input from the local community, park planners and state officials. 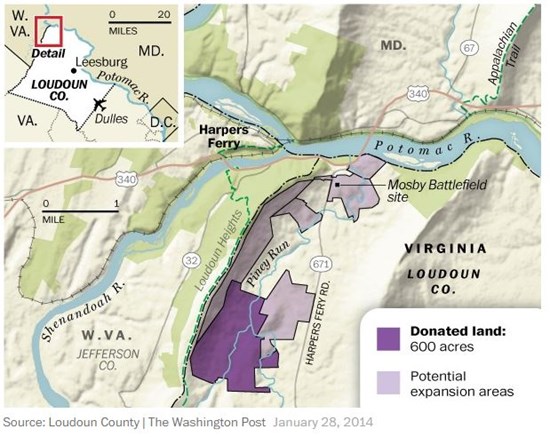