Letter to Secretary of Transportation Layne

Why did Governor McAuliffe push for toll relief for Hampton Roads, but offer nothing for Dulles Toll Road (DTR) users? Dulles Toll Road users and the commuters who have already been forced off the road by sky high tolls deserve an answer to this question.

Shortly after being sworn in, Governor McAuliffe made good on his campaign promise to lower tolls on two Elizabeth River tunnels. The tunnel tolls that generated enough of an uproar in the Hampton Roads area to cause the Governor to act were well below $2 each way. Tolls from these tunnels will go to build another tunnel, which will bring a long term benefit to those paying the tolls.

By comparison, the round-trip cost to drive the 25 miles on Rt. 267 from Leesburg to the Capital Beltway in Tysons in peak hours is an unbelievable $17 and climbing. That toll could double or triple in coming years mainly due to MWAA's outrageous financial plan for the Dulles Rail Metro project which hammers the Dulles Toll Road user with some of the highest tolls in the nation and gives them absolutely nothing in return. Who is looking out for these hard-working folks?

Tolls make sense for roads, bridges or tunnels when the money is used to construct, rebuild or provide extra maintenance for such facilities. But picking the pockets of non-users is a different story.  It’s is unfair to put the burden of funding the Dulles Rail Metro extension on the backs of Dulles Toll Road users. Tolls that go way beyond any sane level will have a damaging ripple effect on the region’s transportation systems and the economy.

Here are a few reasons DTR users, Governor McAuliffe, and the Virginia Legislature ought to be up in arms:

At the onset of the building of the Dulles Toll Road, users were promised the DTR would become a free road once tolls paid for road construction costs.

Those who are Metro users will pay NOTHING to build the extension; in fact the fares of Metro train users will not even pay Metro operating costs for the train once it is built.

Under the current financial plan, Dulles Toll Road users are on the hook for 50% of Dulles Rail capital costs plus interest… that figure could reach an astounding $20 billion.

Under the management of MWAA, DTR tolls share of costs rose from $875 million in 2004 to nearly $3 billion today.

MWAA is raising tolls (and demanding hundreds of millions of dollars in general taxpayer funding) while giving their airport customers and Dulles Airport employees a free ride on the Dulles Access Highway.

Soaring tolls hurt the families, businesses, and commuters on neighboring roads who have to deal with more and more traffic spilling onto local roads as the Dulles Toll Road becomes unaffordable.

In 2004, the cost estimate for Phase 1 was $1.5 billion; cost as project nears completion has doubled to $2.9 billion! Projected Phase 2 costs went from $2 billion in 2004 to $2.7 billion today, before ground has been broken. Dulles Toll Road users have been made the backstop for decades of bad decisions.

In 2006, former Governor Tim Kaine made a deal to give away the DTR without General Assembly approval, voter referendum, or public hearing. The residents of Northern Virginia, Dulles Toll Road users and Virginia taxpayers have been left out in the cold. For the last eight years, federal and state legislators have watched as the projected cost of the Dulles Rail project has doubled and the burden for Dulles Toll Road users quadrupled. While the projected rail capital costs are now known, operating costs and potential capital replacement costs are not.

Without immediate action from both state and federal law makers, it will be impossible to avoid far greater financial problems and the endless demands for more tax payers’ dollars. MWAA must lower tolls.  MWAA must be required to submit to open and transparent management as a condition of receiving Virginia money.

Handing over $450 million from Virginia to MWAA earmarked for toll bailouts while leaving MWAA in charge and unrestrained is sloppy management. Putting Virginia taxpayers on the hook without proper oversight and cost/benefit analysis all but guarantees an extremely low return on the investment. It is time for legislators to engage in serious dialogue and come up with a unified approach, compelling MWAA to take immediate action to shift the cost of the Dulles Rail Metro extension away from Dulles Toll Road users, away from Virginia taxpayers, and onto MWAA’s shoulders.

Northern Virginia’s traffic congestion will continue, and future economic and job growth will be hindered, if toll increases force more commuters off the DTR and onto alternate routes like Rt. 7. I call on Governor McAuliffe and you as Secretary of Transportation to provide desperately-needed accountability and toll relief to Northern Virginia residents. There are some common-sense solutions to this problem, and I stand willing to help you develop a plan. 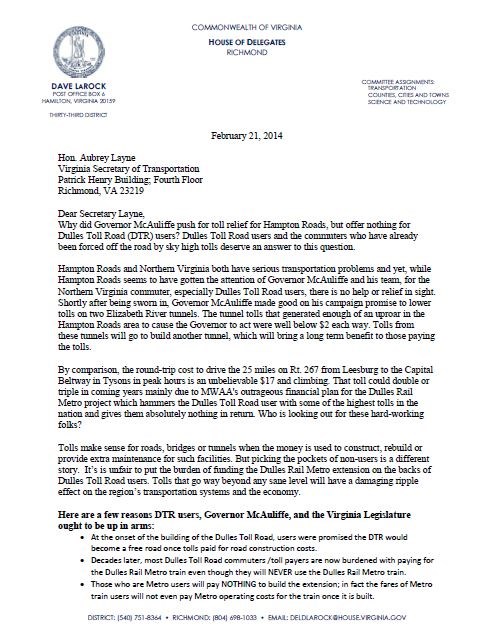 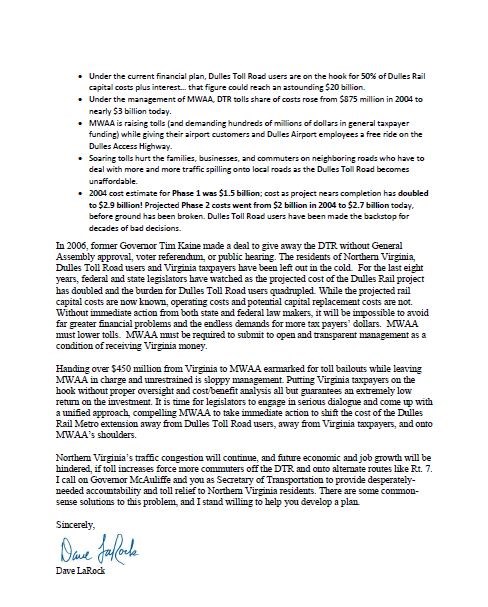