It is no surprise AG Herring is overlooking substantial arguments supporting the constitutionality of such laws, instead relying only on the mistaken assumption that a court would only look at the viability rule created in the 1973 Roe v. Wade decision. There is significant evidence that the Supreme Court may agree the viability rule is extremely flawed, especially as applied to pain-capable laws, or they could choose to abandon the viability rule altogether.


AG Mark Herring on Wednesday, in a Richmond Times Dispatch article, was quoted saying, “The act would… [be] in violation of prevailing Supreme Court precedent.” Herring chose to not mention that laws similar to the proposed Virginia Pain-Capable Unborn Child Protection Act have passed in 16 states and the US House of Representatives, and that the legislation Virginia’s bill is modeled on has not been challenged.


Highly-controversial late-term abortions, which are performed after science has proven that babies are capable of feeling pain, were defended in an op-ed in a Fredericksburg, Virginia paper last Sunday; a day recognized as Sanctity of Life Sunday. The op-ed by Tarina Keene, Executive Director of NARAL Pro-Choice Virginia, referenced claims that babies diagnosed with fetal disabilities should be terminated solely on the basis of that disability. The article by NARAL, a pro-abortion group, attacked the Virginia Pain-Capable Unborn Child Protection Act, a bill filed for the fourth time in the Virginia Legislature in 2017, citing that women may choose not to carry a baby after it has been diagnosed with a fetal abnormality.


LaRock called this especially outrageous, saying “Virginia Code § 2.2-3901 makes it clear that discrimination on the basis of disability is an ‘unlawful discriminatory practice’. Allowing the killing of unborn babies simply because they are disabled is nothing short of eugenic infanticide. Attorney General Herring should acknowledge that the Supreme Court has never endorsed a right to abort children on the basis of disability. Disability groups agree that our Nation’s recognition of the equal dignity of people with disabilities has led to an emerging sense of disquiet about the practice of disability-selective abortion. There is a better way to address these tragic situations where babies have severe disabilities: proper medical attention, including perinatal hospice, cares for children and their mothers with compassion."


AG Mark Herring may be signaling that, if passed and if challenged, he would not do his job of defending the Pain-Capable law. The Attorney General of Kentucky recently pledged to similarly abandon the duties of his office, earning a rebuke from Gov. Bevin. This last weekend, Herring was at the Washington DC women’s march wearing a Planned Parenthood scarf. The Virginia Public Access Project shows Herring has received over $200,000 in campaign contributions from the abortion-for-profit organization, Planned Parenthood. 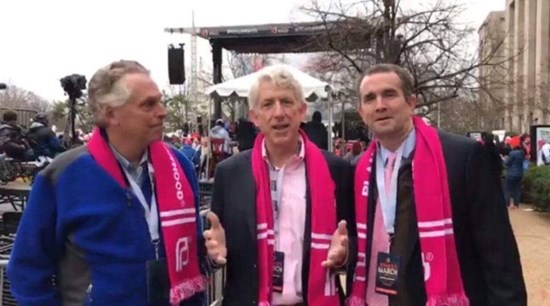