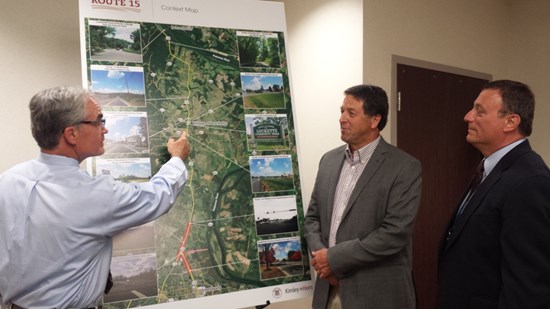 One of the biggest needs in HD-33 is for capacity and safety improvements to US Highway 15 North of Leesburg. I'm glad that the Loudoun County Board of Supervisors is moving forward with improvements, and am advocating for as much as possible to be done as soon as possible.

Unfortunately, some individuals and organizations have been blocking improvements to US 15 for decades, even as study after study showed the need for improvements.

June 23, 2021 Montresor Rd. to Maryland Comprehensive Plan amendment (CPAM) Public Information Meeting
Loudoun County is hosting an online meeting to gain input from the public on the Route 15 from Montresor Road (Route 661) to the Maryland state line Comprehensive Plan amendment (CPAM). The public information meeting will be held on Wednesday, June 23, 2021, from 6:00 – 7:00 p.m. This CPAM would revise the planned ultimate condition of this corridor and potentially modify associated content and policy statements in the 2019 Comprehensive Plan. Members of the public are invited to join the virtual meeting to learn and ask questions about the amendment.  Login information and meeting materials are available for review at loudoun.gov/route15CPAM and loudoun.gov/remoteparticipation. Meeting materials will include exhibits and speaker sign-up and comment forms. Members of the public must sign up in advance by 12:00 p.m., Tuesday, June 22, 2021, to ask questions during the event. Online participants may also send questions to the project team as chat messages, which will be answered during the meeting as time allows. In 2016, Loudoun County initiated a Route 15 Congestion Study to identify the cause of recurring congestion on Route 15 north of Leesburg. The study report concluded that additional capacity was needed along the corridor and recommended widening Route 15 to four lanes from Battlefield Parkway to a point north of Whites Ferry Road. At the Board of Supervisors’ direction, the report was expanded to include a Safety and Operations Analysis of Route 15 from Whites Ferry Road to the Maryland state line. On March 6, 2018, a CPAM was approved to amend the 2010 Countywide Transportation Plan to revise the planned ultimate condition of the segment of Route 15 between North King Street and Montresor Road from a two-lane, local access, undivided rural arterial roadway to a four-lane median-divided road. For more information about the Route 15 from Montresor Road to the Maryland state line CPAM, including a link to sign up for updates about the project and upcoming public meeting, visit the project page on the county website. For more information about active CPAMS, visit loudoun.gov/CPAMS.

I attended the meeting, where the results of the Safety and Operations survey were discussed, along with updates on the Congestion project from Battlefield to Montresor and the interim project at the King St. intersection to Tutt Ln.. More information from the meeting is at the project website here.

Loudoun County encourages residents to participate in an online survey about safety and operational improvements proposed for Route 15 between Montresor Road and the Point of Rocks Bridge. The survey presents three options for consideration:

Both options A and B propose a bypass around the Village of Lucketts.  The survey also asks if there is a preference for the bypass to be located on the east or west side of Lucketts.

The survey is a follow up to an open house hosted by the Loudoun County’s Department of Transportation and Capital Infrastructure on September 26, 2018. The survey will be open through Thursday, October 18, 2018.

More information about the Route 15 Safety and Operations study, including links to the survey and the proposed improvement concepts, may be found at www.loudoun.gov/route15

September 26, 2018 An open house about the Route 15 Safety and Operational Study (Whites Ferry Rd to Point of Rocks Bridge) was held. One new idea presented was an possible alternative alignment for the Lucketts bypass, on the East side, rather than the West side, of the village, mostly through County-owned property (red outline). The information presented at the open house is available here: https://www.loudoun.gov/Route15 and an online "Concept Preference Survey" is available here. 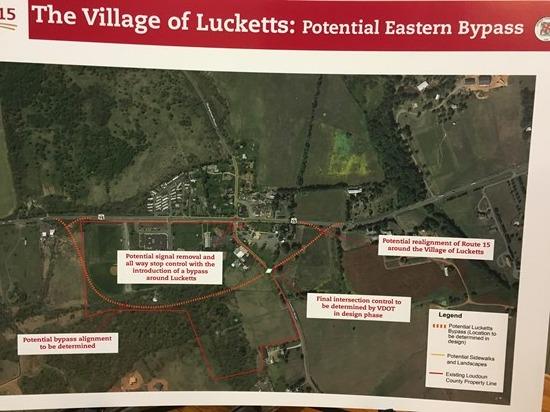 September 20, 2018 - Thank you to the Loudoun County Board of Supervisors for adopting the Congestion Report staff recommendations to move the Battlefield Pkwy to Montressor Rd. project forward to design and construction. Video of the Board's consideration is available here. I spoke in favor of moving these improvements forward to design and construction (video here).

June 14, 2018  - Tonight, the Northern Virginia Transportation Authority (NVTA) approved the full $54 million funding request for Rt. 15 widening North of Leesburg to Montresor Rd., as well as the final $25 million for the Rt. 7 interchange at Battlefield Pkwy! Also, some funding was included to help with design of the Rt. 15 Bypass interchanges at Battlefield Pkwy & Edwards Ferry/Ft. Evans Rd. More information on the NVTA funding award and their $1.285 billion FY2018-2023 Six Year Program of 44 regionally significant projects is available here.

November 8, 2017- Tonight the Loudoun County Board of Supervisors adopted a staff recommendation that the US 15 widening to four lanes from Battlefield Pkwy to Montressor Rd. be made the #1 priority in Loudoun's NVTA funding request. As noted below, Senator Black and I joined numerous local residents in urging the Board to make this a top priority, so I am very grateful to the Board and DTCI staff for making this change. The Board's item on this is here.

October 19, 2017 was an opportunity to speak out on the importance of these issues. I urged the Loudoun County Board of Supervisors to prioritize the critical Rt. 15, and Rt. 9 safety and congestion projects- instead they prioritized other projects to build roads through empty fields- projects that should be funded by the developers, not taxpayers. You can watch video of my speech at the 2:58 mark of the video below.

Here's what I conveyed to the Board:

I’m here to address the urgent need for improvements to Rt. 15 North of Leesburg.

Since 1998, 7 studies have all pointed to various needed projects for safety and congestion relief.

Some improvements have been implemented but many have not

Let’s look at this from the perspective of a resident who lives near and travels Rt. 15
Moving into a community, there are certain expectations of our transportation network, the same expectations any member of the board has:

If you live close to Rt. 15 there are significant periods of time when basic mobility does not exist.

How did it get this bad, obviously the roads have not kept pace with population growth.
Some speculate that influential people who prioritize historic preservation over personal safety have stalled progress to improve this corridor.

I poked around and was pleased to find that the JTHG “Corridor Management Plan” says this:

Quoting the Plan, “The overall Byway management goal for roadway safety and wayfinding is to “Promote the creation and maintenance of transportation systems that…protect efficient, safe, and enjoyable travel through the corridor…” end quote-  I’m not sure that point in the plan has gotten enough attention.

I expect this Board agrees it is important to preserve the rural character of western Loudoun:

Speaking of Historic preservation and enjoyment- no one in their right mind thinks cars sitting in traffic are good for the environment or enhance the historic experience.

Regarding the NVTA Funding request:

I urge the Board to address safety on Rt. 15 by moving this project forward ASAP, and prioritizing it for NVTA funding.

My response to the misleading Loudoun Now editorial 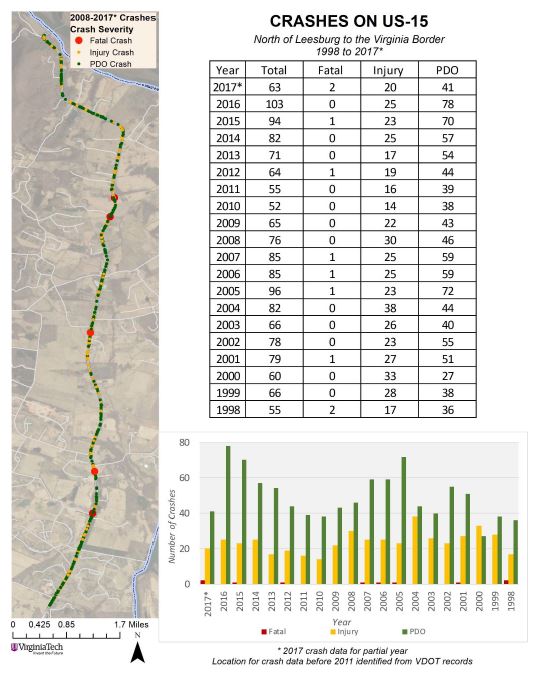 More photos from my involvement at recent US-15 meetings: 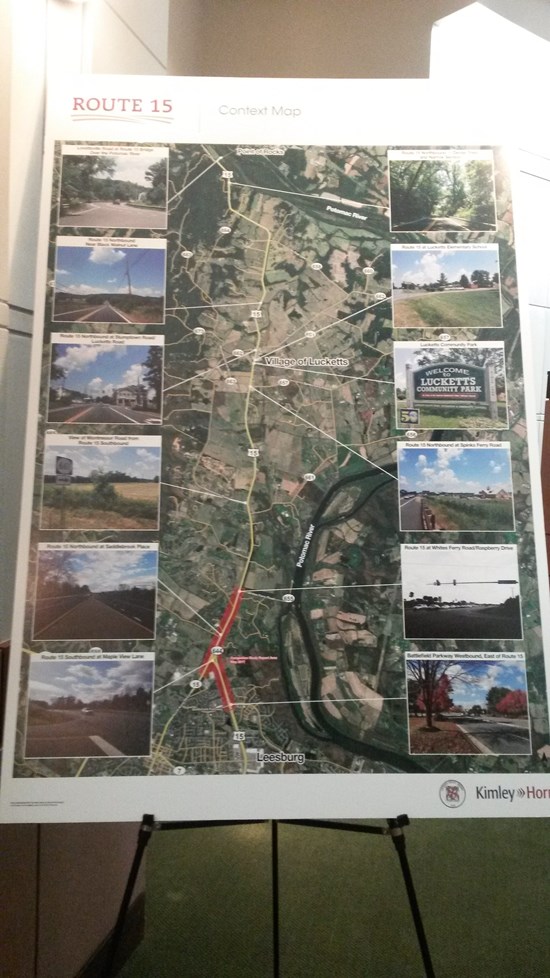 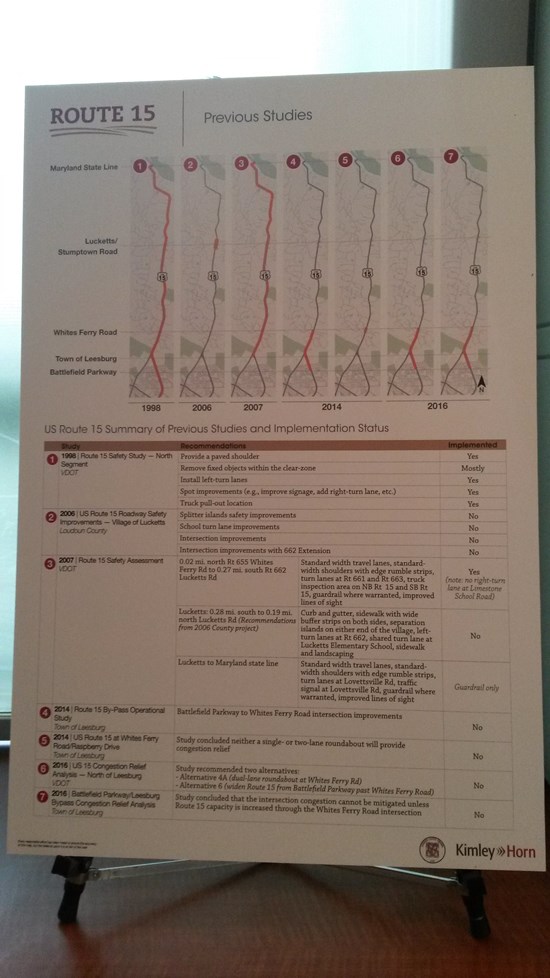 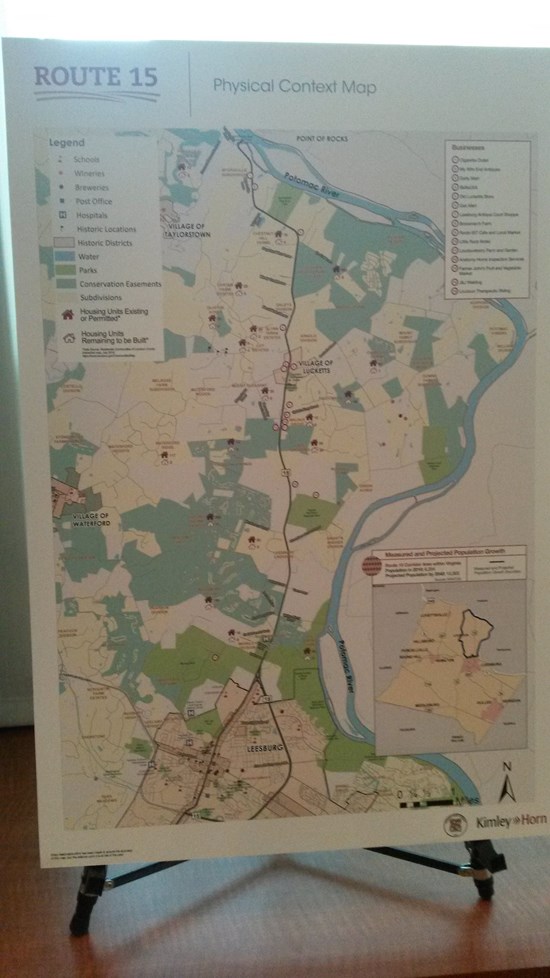 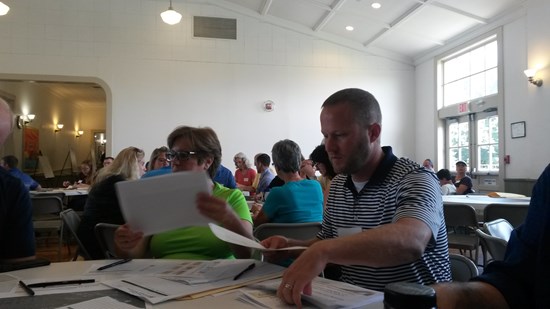 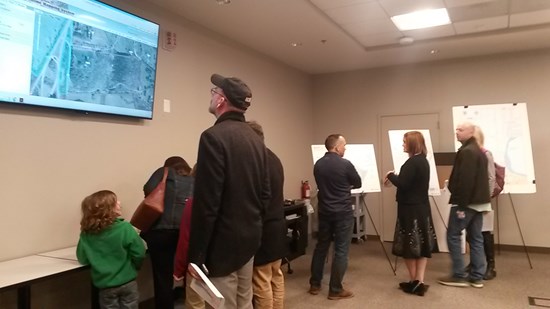 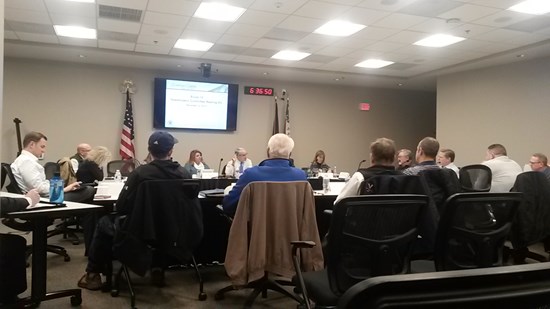 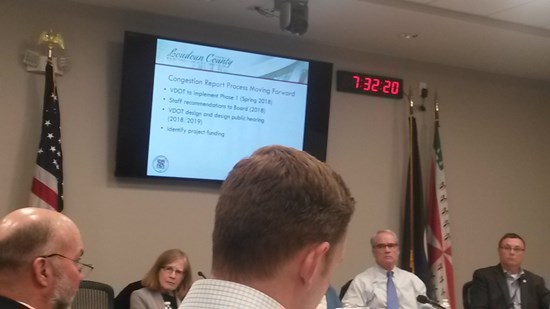